Currently, there is a lot of misunderstanding relating to the types of colloidal silver products on the market. Much of the confusion centers on the use and misuse of the term “colloidal”. In order to better understand the term “colloidal”, a brief background in the chemistry of matter is useful.

One of the principal ways to classify matter is to categorize it as either an element or a compound. Elements, of which only around 118 have been identified, are some of the most basic substances known. Compounds are formed when elements are combined in specific proportions and arrangements. Silver, an element, can exist in its pure elemental form or as a compound combined with other elements. Typically, when silver exists as a compound, it does so by giving up electrons to other elements in the compound. When it does this, the silver atom becomes positively charged and the other elements become negatively charged. Charged atoms or groups of atoms are called ions and compounds containing ions are called ionic compounds or salts.

It is important to realize that when an element is transformed to an ion by giving up or accepting electrons, most of it’s physical and chemical properties change too. A good example of this is when the two elements, sodium and chlorine, are combined to form the ionic compound sodium chloride. Sodium, in it’s elemental form, is a soft, silvery metal that reacts violently with water, and chlorine is a suffocating, caustic, green gas. However, they combine to form the salt, sodium chloride, or common table salt. The differences in the physical and chemical characteristics between the elemental form and the combined, ionic, compound-form are dramatic. 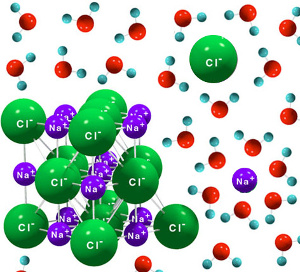 Dissolution of Sodium Chloride in WaterWhen ionic compounds, or salts, dissolve in water, they breakup into their constituent ions. For example, when table salt, sodium chloride, dissolves into water it breaks up into positive sodium ions and negative chloride ions. Water molecules surround each ion and continue to strongly interact with the ions when dissolved in solution (see figure).

Ionic solutions are transparent and stay dissolved indefinitely due to the strong interaction with the water molecules. Even if we were to place the solution into a centrifuge, the salt would not separate out from the water. We call these solutions “true solutions”. These solutions are homogeneous, that is, they are the same throughout the solution and even if we were to look at it under the most powerful of microscopes we would not be able to see the separate ions and water molecules. It would be incorrect to call this a colloidal sodium or colloidal chloride solution. They do not contain elemental sodium or chlorine, they contain their respective ions.

Now, many of the products on the market today that claim to be colloidal silver are actual silver salt solutions. They are typically prepared using an electrical circuit to transform silver metal into silver ions. While these solutions do have beneficial uses and drawbacks, they are not colloidal solutions of silver metal. They are solutions of silver ions. One of the drawbacks of using ionic silver include the bluing of the skin over a prolonged, high-dose regiment, also known as agyria . This condition has received a lot of attention due to reports of the “blue man” or other individuals with a noticeable blueish tint to the skin over the entire body.

Colloids are mixtures where small particles of one material are suspended within another material, with no strong interaction between the materials. Typically, the materials have different phases, for example one may be a solid and the other a liquid. Some common examples of colloids include; smoke (solid carbon suspended in air), milk (fats suspended in water), foams (a gas suspended in a liquid or solid), and, of course, colloidal silver (solid silver suspended in water). The suspended particles are extremely small, typically smaller than 1/1000th the width of a human hair. In Silver Botanicals’ solutions, colloidal silver particles are extremely small, only clusters of around 30 silver atoms.

If you have further questions related to this topic, please email us at Turn on Javascript! and we will be happy to continue the conversation.