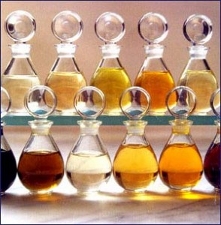 The concentrated essences of plants have been used medicinally for millennia. In modern times, many have forgotten the power of these ancient medicines of the earth. The inherent power of these unique, naturally-derived oils has been replaced by the synthetic and/or toxic substances commonly produced by the chemical industry. However, the popular appreciation of essential oils has grown in recent decades. Modern scientific research has revealed the complex molecular composition of essential oils and proven their potent therapeutic properties. For example, the essential oil of thyme contains over 28 constituent compounds, one of which, thymol, demonstrates powerful antiseptic properties. Furthermore, thymol has been shown to exhibit fungicidal, anti-tumoral, antioxidant, and anti-mutagenic properties. Since plants do not have an active respiratory system, many of these plant-produced oils facilitate the transportation of nutrients and toxins across the cell membrane. Unlike many synthetic compounds, essential oils do not remain in the body and leave no toxins behind. Essential oils improve air quality as they cleanse the air by deactivating malodorous compounds rather than masking the unwanted smells. When we are looking for alternatives to toxic products in our homes and in our lives, essential oils are a convenient, practical and pleasant solution. Silver Botanicals' use of essential oils and other natural ingredients provides a synergistic approach, weaving the wisdom of plant design with the fidelity of modern technology. 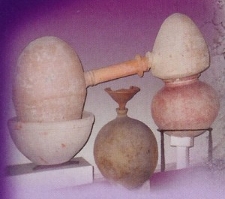 water and brought to a boil. Oils from the plant are volatilized along with the water and captured into a receiving container, from which they are then separated from the water. Some essential oils are not distilled, rather they are pressed (e.g. citrus oils) or collected in the raw, resinous form directly from the plant (i.e. balsams). The oldest research dates the use of essential oils back to around 4500 BC. The ancient Egyptians were some of the firsts to discover the power of aromatic oils, and hieroglyphics demonstrate that oils and aromatics were used for treating illness, performing rituals and religious ceremonies, and embalming. The oldest known distiller used to prepare essential oils, dated around 4000 B.C., was made of terra cotta. Essential oils were considered more valuable than gold to the ancients. For example, when King Tut's tomb was opened, some 50 alabaster jars designed to hold 350 liters of oils were discovered. While tomb robbers had stolen nearly all of the precious oils, a literal king's ransom in glittering gold was left behind. The Egyptians took personal hygiene seriously, as shown by the earliest recorded recipe for a body deodorant in the Papyrus Ebers 1500 BC. The scroll, which measures over 870 feet long, included over 800 different herbal prescriptions and remedies. Other scrolls described a high success rate in treating 81 different diseases. Priests used essential oils in their role as "psychiatrists" for treating manias, depression, and nervousness. Also, at this time, ancient Chinese manuscripts (around 2700 B.C.) reported the use of essential oils in eastern Asia. In Ayurvedic medicine, which has been practiced in India for at least 4000 years and is still widely practiced today, the oils of cinnamon, ginger, myrrh, coriander, spikenard, sandalwood, and basil are used therapeutically.

The medicinal wisdom of the Egyptians was taken over and absorbed by the ancient Greeks. Hippocrates, "The Father of Medicine" was believed to have halted a devastating plague in Athens with essential oils. He was a firm believer that the best way to cultivate good health was to have an aromatic bath and scented massage every day. The Greek physician, Dioscorides, wrote a book describing methods still used by aromatherapists today. The Romans diffused essential oils into public baths and buildings for purification and health purposes.

There are more than 188 references to oils in the Bible and daily application of them was extensive at this time. Essential oils of frankincense, myrrh, rosemary, cassia, and cinnamon were used for the anointing and healing of the sick. During the Crusades, essential oils and distillation techniques made their way into Europe. Terrible plagues swept much of the world throughout the Middle Ages. By the sixteenth century, Europeans had developed essential oils from native plants such as lavender, sage, and rosemary. Publications dealing with the distillation of essential oils and their medicinal aspects began to surface. By the beginning of the seventeenth century, approximately 60 essential oils were known and used as medicine in aromatic concoctions. During the eighteenth century, thieves used a blend of essential oils to protect themselves from illness while looting the bodies and homes of people who had died from the bubonic plague. These oil blends were a marriage of oils acquired through trade with asia, along with oils developed in Europe. Though there are several recorded recipes, the oils most likely used were cinnamon, clove, oregano, wormwood, angelica, rosemary, rue, calamus, and garlic. Also, people in certain occupations that exposed them to plant oils in their daily work, such as perfumers and tanners, escape the ravages of the plague. People in certain geographical locations were also spared from the plague. Bucklersbury, England is one such example. As the center of the European lavender trade, virtually the entire town was spared from the plague, while residents of other towns close by died in droves.

Over the past, few centuries, the advancement of mankind's knowledge of essential oil has expanded greatly. The use of literally hundreds of essential oils has been discovered and/or investigated. The potential for natural, alternatives to treat our illnesses lay before us. At Silver Botanicals, we see it as our job to develop this well spring of potential therapeutics to meet our personal and household hygiene needs in a safe, natural, and responsible way.

The variety of actions essential oils have on the human body is truly awe inspiring. Not only do the oils affect the body, they also can have a dramatic effect on the host of microbes (e.g. bacteria, viruses, molds, fungus, & bugs) that we share our environment with. The list of effects totals in the hundreds. Everything from treating dry skin to killing lice in the larval stage, the versatility of essential oils allow for their practical use in almost every aspect of our daily lives. An abbreviated list of some of these actions are:

Essential oils have three distinct modes of action with regard to how they interrelate with the human body: pharmacological, physiological and psychological. Each oil has its own "spectra" of actions. For example, lavender oil is great for treating dry skin, burns, and depression. It also helps deaden pain, helps lower blood pressure, and repels a variety of insects. Silver Botanicals focuses on developing blend of essential oils that synegistically work together to provide amazingly effective results. 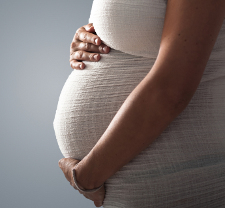 When used appropriately, essential oils are extremely safe and effective therapeutic materials. However, some oils can be hazardous when in inexperienced hands. Some oils are dermal irritants at given concetrations, some should be avoided or used in reduced concentration during pregnancy, while others are outright toxic. Makes sense, right? I mean if one where to prepare an essential oil of poison ivy, it would be extremely dangerous to come in contact with. What is most important when it comes to essential oils is that one should be aware of potential dangers they may pose and use them, when appropriate, in safe concentrations. Silver Botanicals chooses the oils we use based on safety guidelines that include what oils we will use, what concentrations we use them in, and how the oils in a product are intended to be used. Lastly, one should understand that each of us have unique body chemistries. Some individuals may have some dermal irritation when using a particular oil, while another may have no adverse reaction at all. When using products containing esential oils, it is best to evaluate your sensitivity to it by using small amount at first. Take notice of the effects you may experience, and evaluate, for yourself, whether or not to continue use.